I’m in no way partnered with any brands mentioned nor are any of the links referrals. They’re simply links to products I used.

We had our first child five months ago. A beautiful little boy- Remi. We’re lucky enough to have good friends around us who have also recently had children and we received lots of baby clothes, toys, and items donated or on loan.

This post is written not with any advice in mind, but around some of the repetitive tasks we do daily and items we found useful each day.

A cute multi-piece outfit is great for pictures, but when you’re tired and on your nth diaper change of the day you don’t want to deal with multiple clothing items. Taking the pants off, undoing the tuck flap button. Maybe removing a sweater. Most days a full body onesie will save you time and effort.

Useless*
They end up kicked off within minutes. We own only a few pairs and I’ve put them on him maybe three times in these five months. They’re cute, and again make for great photos, but usually impractical.

As part of the full body onesies ensure they have footies or attached booties. This goes for pants as well. Of all the pants we have I mainly use the ones with footies attached because I never put socks on him. 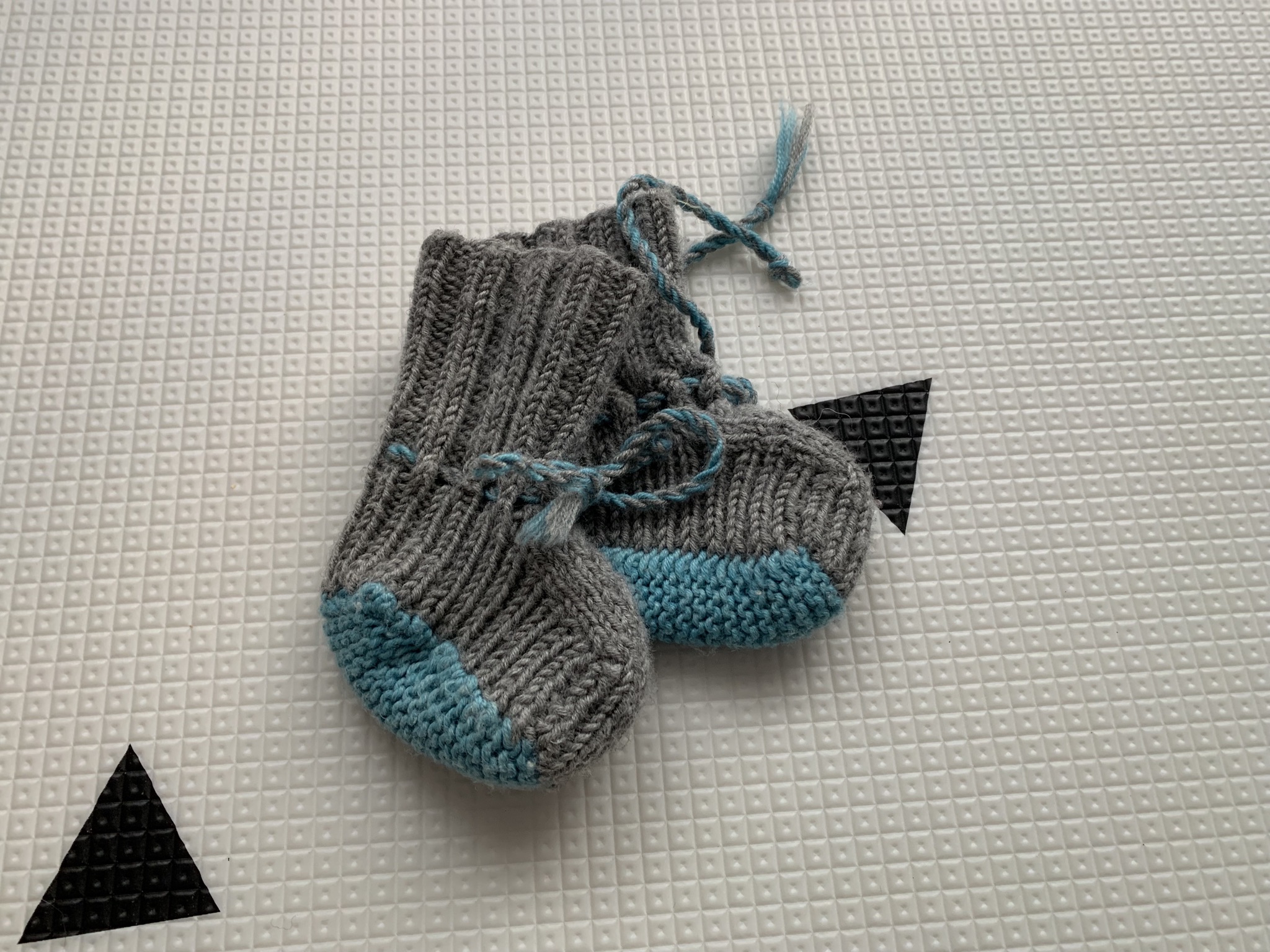 Display of wonderful blue and grey knit socks
*The exception to the rule: This single pair of hand knit socks made by a friends mother for their baby. They were handed down to us as their children had grown out of them. The combination of high sock and being able to tie it around the ankle give them a much higher chance of staying on longer.

Just have lots.
Remi suffered from reflux so he may have spit up more then normal in the beginning. Every morning I had to put three to four wash cloths in the living room to clean up spit up and drool. Most days all the wash cloths will be soiled by bedtime. They don’t need to be decorative or fancy you just need them in quantity. He does have a preference for softer clothes when wiping his face though 😄.

I found I had to use 2-3 disposable wipes every cleanup. These reusable wipes clean more efficiently. I can use a single wipe per diaper change. Then just toss it in the “mucky” box, and about every two days we wash everything in the mucky box. At this point because he’s not eating solids infant stool is water soluble and can be thrown directly into the washing machine. After the wash the wipes are still completely white. It’s worth noting that when we washed them at 40°c they left a little staining. When washed at 60°c even the previously stained ones came out perfectly clean.

There’s a lot of variation in the realm of cloth diapers. All-in-ones, inserts types of inserts, bamboo, hemp, microfibre, cotton. Different babies of course have different needs and which type you need will vary. We spent our first two days trying cloth diapers without success. We had to change his onesies with every diaper because he had peed completely through them. It was time to do some tests. We had bought everything second hand and had a mixture of cotton, hemp, and microfibre inserts at different sizes, with a couple differently sized diapers. We tried each liner in each diaper and ran them under the tap. We realized that the cotton liners held water fine but they absorbed far to slow, causing the water to runoff the side of the diaper and leaking. The microfibre and hemp liners absorbed initial flows much faster and we decided they were preferable to the cotton liners.

How long they last

Then comes duration of use. If a normal diaper lasted 2-3 hours, a cloth diaper lasted 1.5-2. They just don’t hold as much. Which means you have the new task of keeping track of how long they have been wearing that particular diaper. On the other hand more changes isn’t really a problem because they’re mostly waste free! Once he started approaching 3.5 months we started double-lining the diapers. One microfibre closer to the body, and a cotton layer behind it. This helped extend the usage per diaper by about an hour.

We don’t use them all the time. I think they’re great and we like using them. It’s less waste in the bin, and babies get use to a “wet” sensation which supposidly helps them recognize peeing habits down the road when it comes to potty training. We still don’t use them all the time though. I don’t want to deal with carrying a bag of soiled cloth diapers around outside. If we’re going out and we know we’ll be out for more then a couple hours we will use a disposable diaper. If we change him while we’re out we can toss it in any bin. We also don’t use them overnight. As I said the duration for them is 1.5-2 (now 2.5) hours. He can’t sleep through a night and not end up peeing through his pjs. 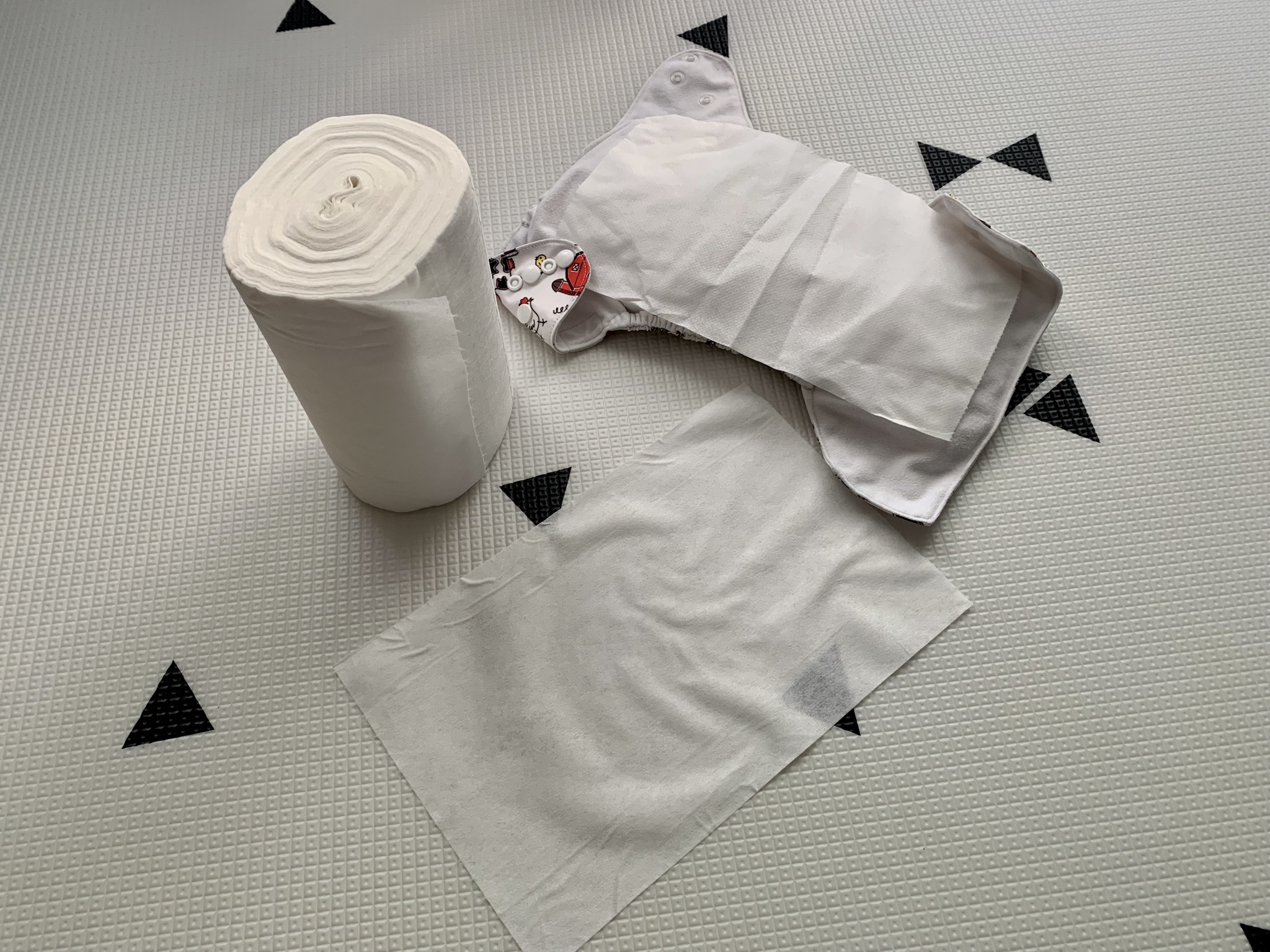 Diaper liner roll with liner on diaper
They’re like a biodegradable single piece of paper towel. You put them between baby and the diaper. This essentially catches the majority of the spoilage and when you’re removing the diaper you can remove this single sheet and drop it straight in the bin. Leaving the reusable diaper in a much cleaner state for machine washing. It is one more piece of waste but I take comfort knowing it’s biodegradable and a single sheet is still less waste then a single diaper.

Although we bought them early, we didn’t start using them until about 1.5 months because infants are just to small for them, and the extra effort in those early weeks is just not something you need to be focused on.

It is more to think about and do but to me it’s an excellent trade off. Both for saving money, and preventing environmental waste. 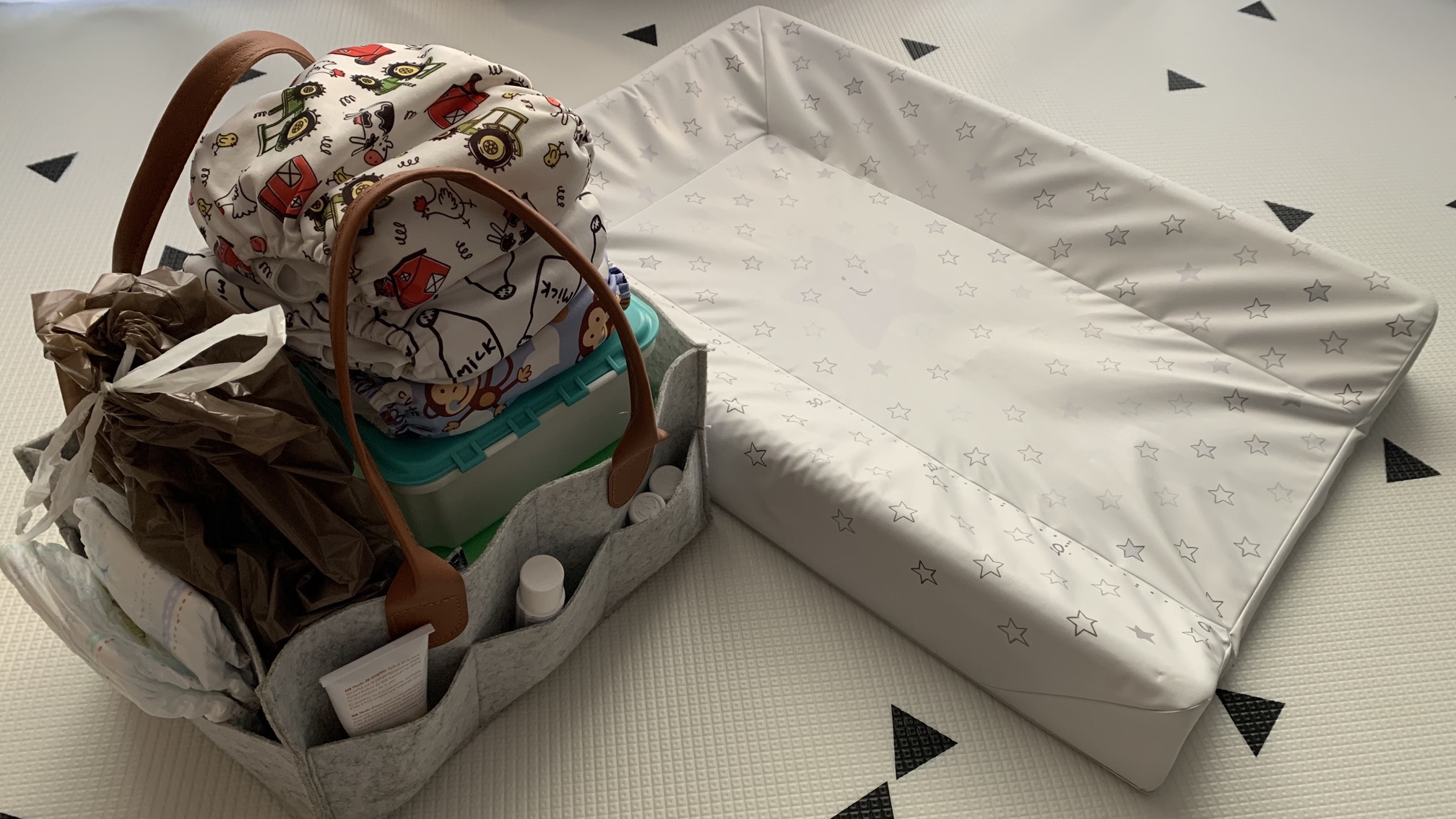 Our mobile diaper caddie
We don’t have a changing table. We have a portable changing station. Why have a table that you always need to go too. In the middle of the night I don’t want to wake up and take him to another room. Or to be playing with him in living room and have to go somewhere to change him. We bought a mat, and a caddie. The caddie contains creams, disposable diapers, the reusable wipe boxes, a garbage bag for waste, and usually a stack of 1-4 reusable diapers. This allows us to have it wherever we are in the home. It’s in our room at night for quick sleepy diaper changes. It’s in the living room during the day where he’s playing. It’s wherever we want it to be, instead of the need to go anywhere else. This was our primary diaper changing situation until about four and half months. All of a sudden his diaper changing needs often aligned with his nap cycles so it became practical to change him at his crib, which conveniently had a diaper change addon built in. 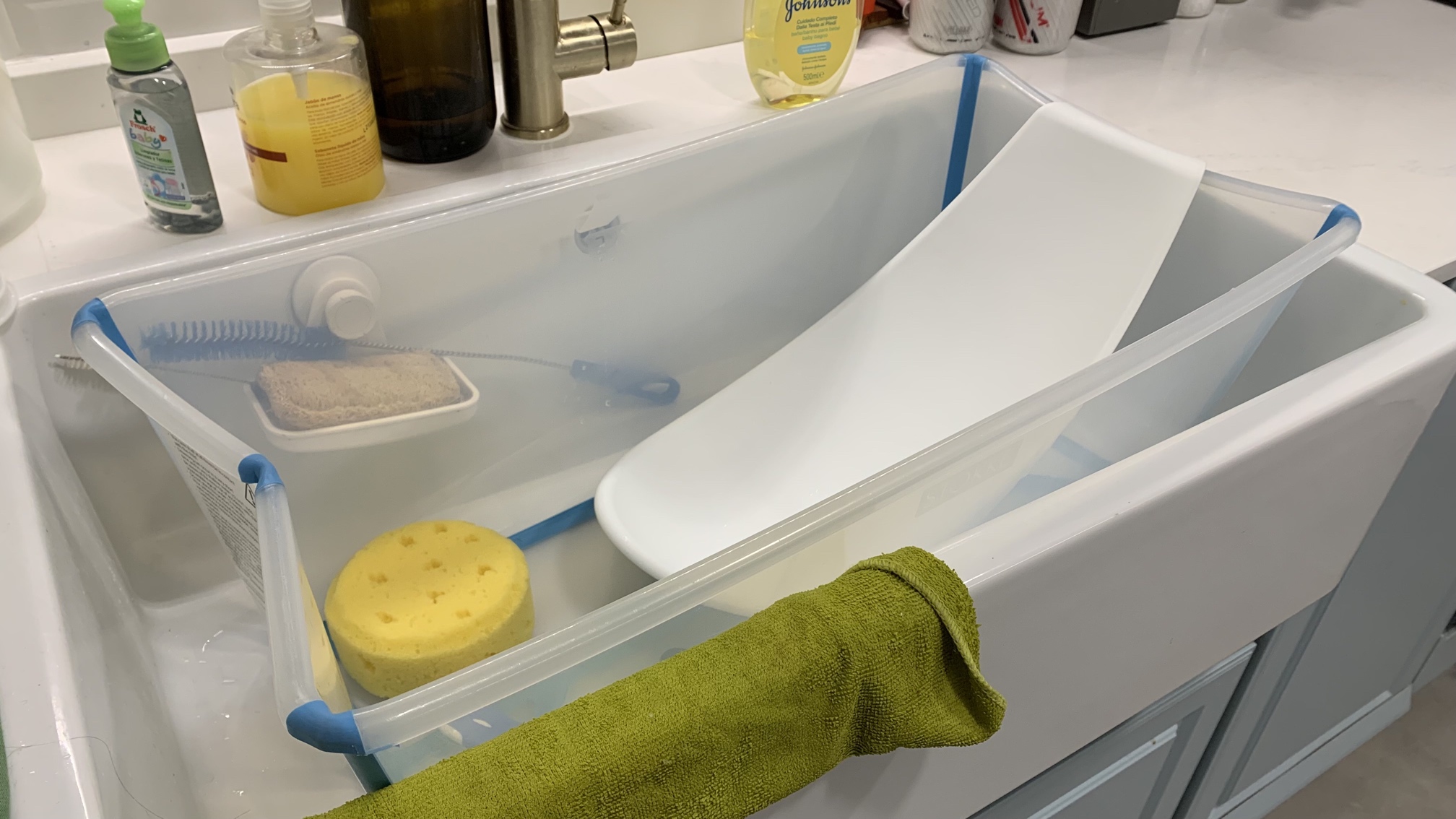 Baby bath in the sink
I knew we would end up getting a baby bath but I wasn’t expecting a support. The support clips to the edge of the bath and Remi sits comfortably in the water. It keeps his head safely out of the water during bath time. He can still splash and kick around, and we can be a little more worry free. 🎶Little baby spa time🎶

That’s it. We use these things every day and a few simple variations makes dealing with them easier and the three of us happier.